From Districts to State

On Monday, February 29, nine students went to compete at Sectionals, the stepping point between the Districts and State competitions, held this year in Eagle Point. Students took part in multiple CDEs: Parliamentary Procedure, Extemporaneous Speaking, Creed Speaking, Public Speaking, and Job Interview. Lukas Roman, a Sutherlin High School senior who was an Extemporaneous Speaking participant, said that this year, “. . .Sectionals were very competitive and a lot of fun. Everyone worked really hard and did a great job.”

All-in-all, this year was a good one for Sutherlin FFA. A total of four people and teams placed and three people are moving on to the next level. Great job to all competitors and congratulations to all who placed! 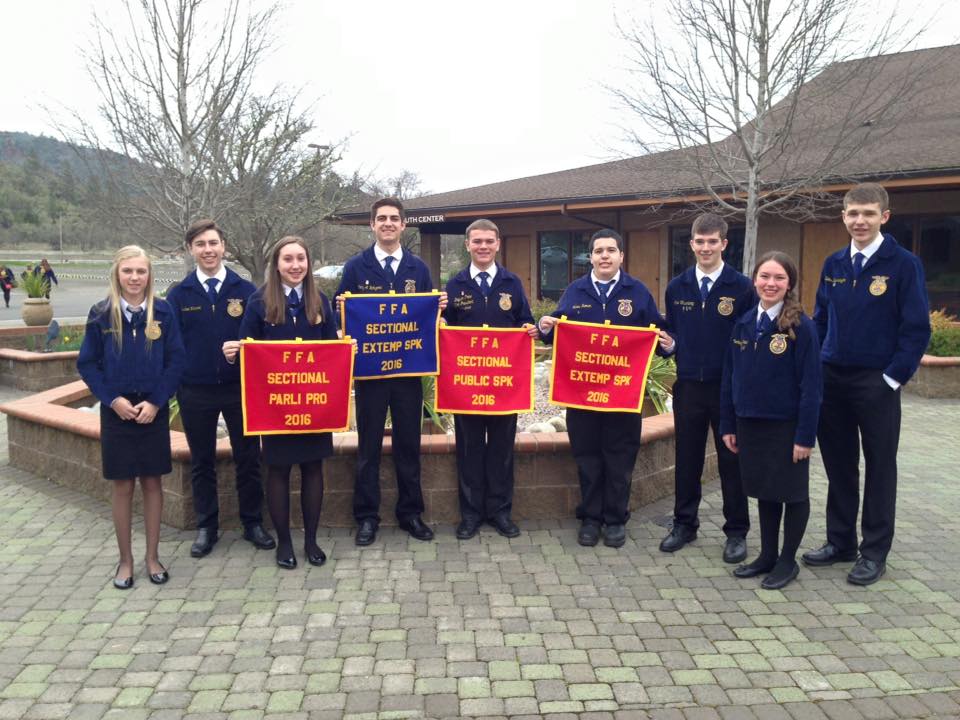 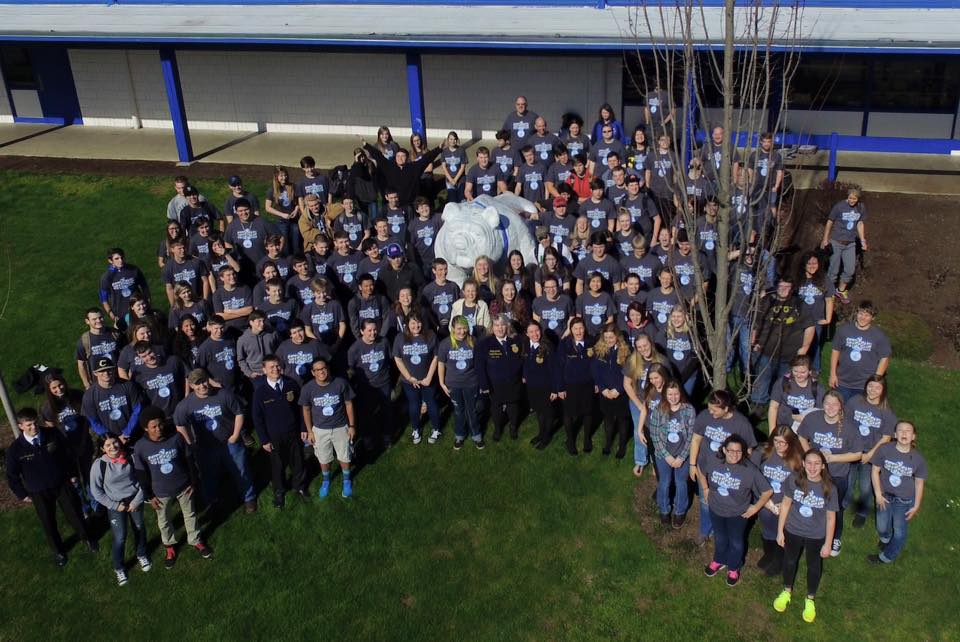 On the week of February 21-27, FFA Week was celebrated nationally. Sutherlin FFA members and high school students participated in the event as well. It happens annually and is to recognize the National FFA Organization and what it does.
To start off the week, FFA decorations filled the halls of the school, including quotes from many members, stating what FFA has done for them. A lunchtime activity of “Human Checkers” also took place for members and students to enjoy playing and observing. Later on in the week, all FFA members and school staff were given t-shirts to wear the whole day. Also on that day, an assembly was put on for the whole school going over the FFA motto which is: Learning to do, doing to learn, earning to live, and living to serve. A fun bonfire barbeque was held at the Land Lab to wrap up the exciting week, and was announced earlier on with S’more candy grams. Overall, the week was fun, educational, and an exciting time.

Parliamentary procedure is a system of organized arguing over various agricultural topics and teams must conduct the argument in front of a panel of judges. Public speakers give a speech in front of judges that they have written on an agriculturally-related subject, then must answer questions related to their speech. Extemporaneous speakers must study topics previous to the competition, then will get a drawn topic the day of the competition. They have a limited amount of time to write and memorize their speech then present it to judges. The Creed competition is where new members get the chance to recite the FFA Creed and answer a question from that. 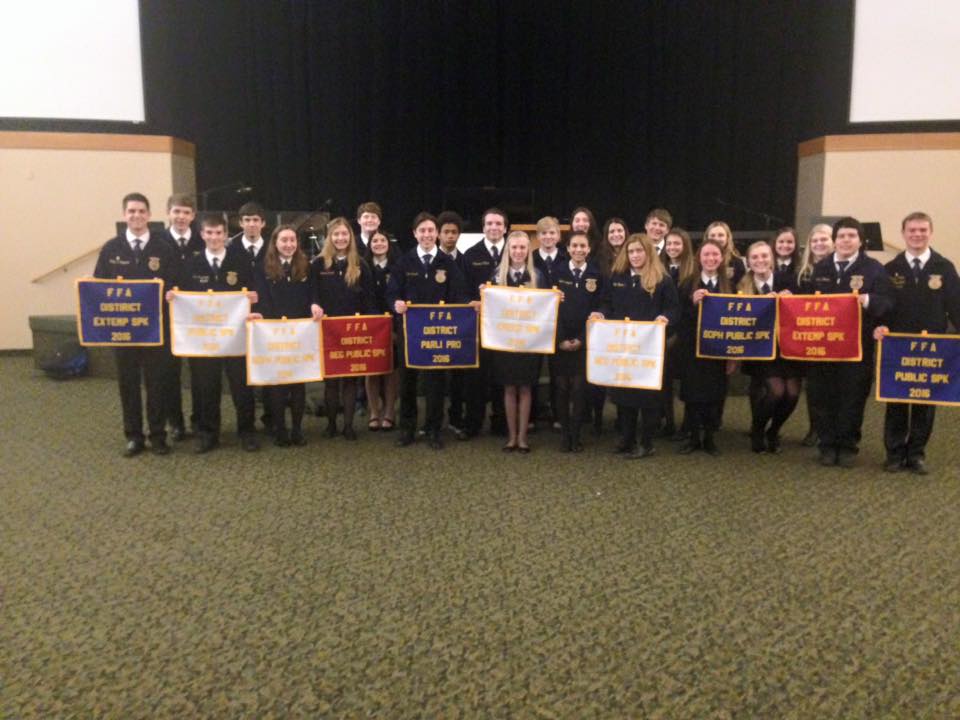 FFA Week is Coming Up! 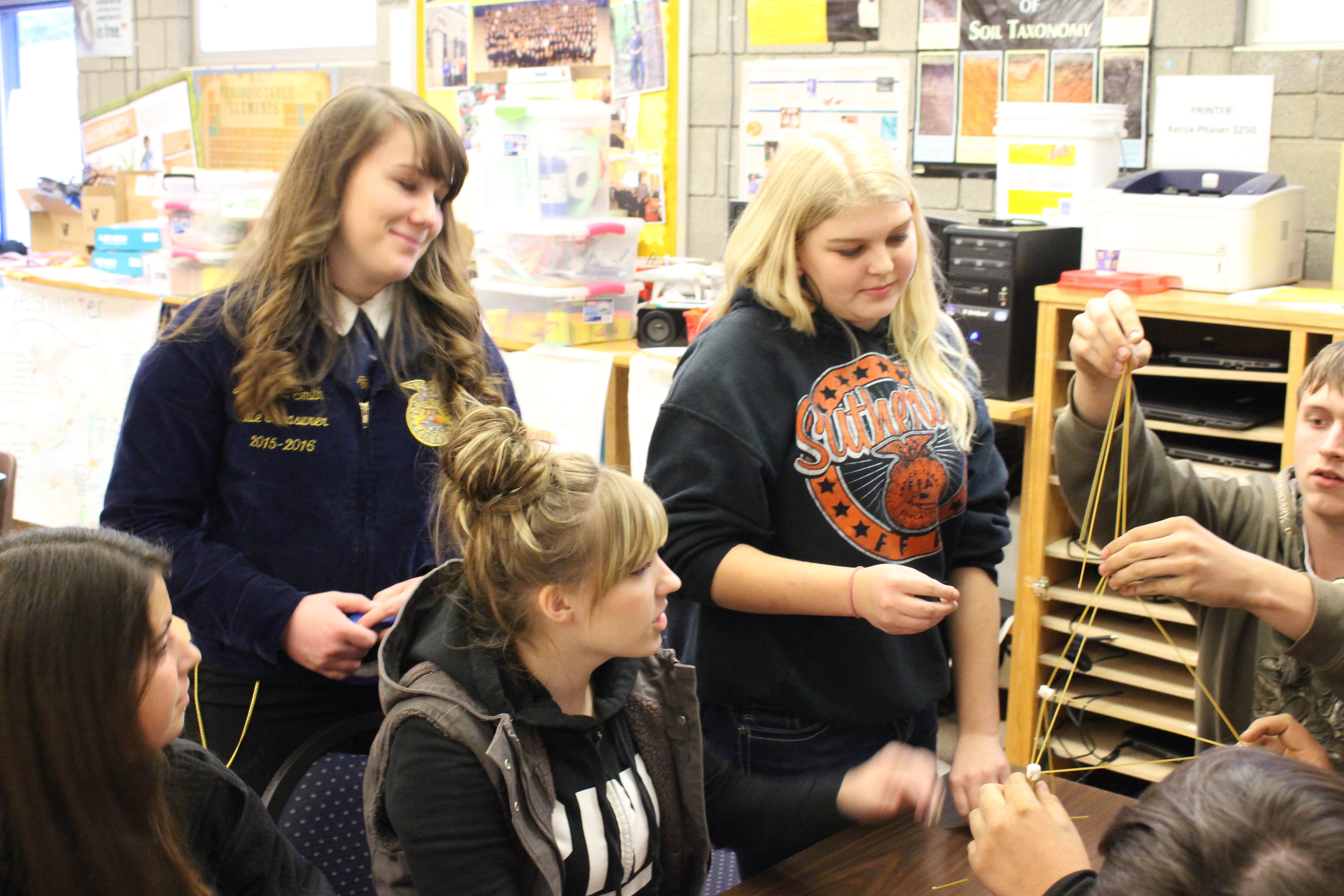 FFA Week is just around the corner! On the week of February 20th-27th, members everywhere will be celebrating FFA through many different types of activities and other things. It is an exciting time to spread awareness of this amazing organization, and just to have fun.

Sutherlin FFA will be holding an assembly that covers the FFA motto, which is “Learning to Do, Doing to Learn, Earning to Live, Living to Serve”. The assembly will have different tasks for students to complete that have something to do with each section of the motto.

To spread more consciousness throughout the community on what the Sutherlin chapter is doing, as well as local chapters, there will be a feature in the newspaper on all of the different things that are happening all around the Umpqua District chapters.

Other things such as “Candy Grams” and “Ag Swag” for Sutherlin members will be presented during the week. A FFA Night at Matthew Knight Arena will be held the Saturday of FFA Week, and many chapters, including Sutherlin, will be attending.

ity to show what is going on within this amazing organization! 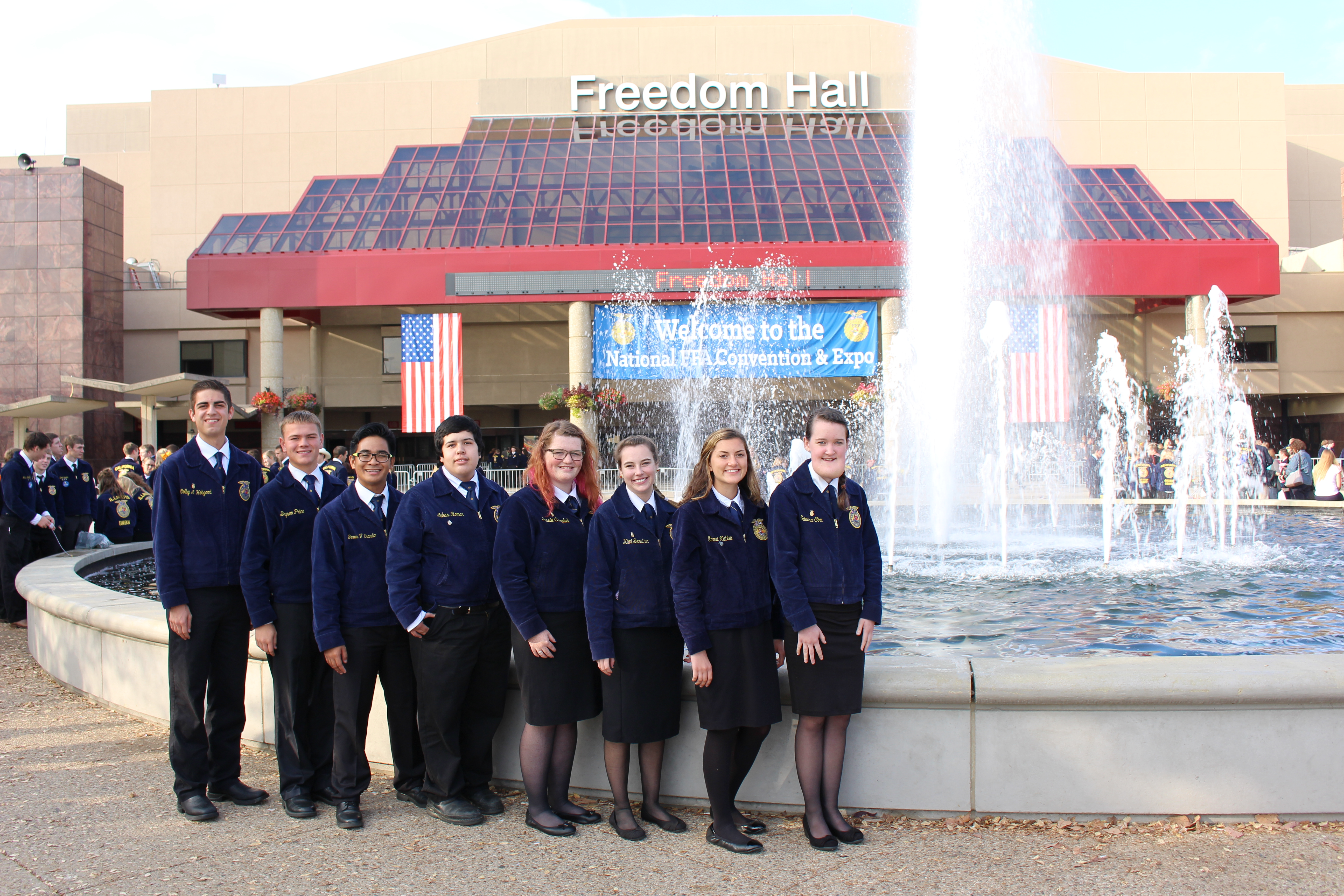 National Convention was held in Louisville, Kentucky on October 28th-31st. Eight Sutherlin FFA members traveled there on October 24th to tour the area, and later on in the week, compete in their national-level events. Upon arrival, students immediately were able to learn about the region and what it has to offer. The teams also did very well placing in their events.

Students toured many interesting sights and learned a lot from them. This consisted of the Corvette Factory, Mammoth Caves, Louisville Slugger Factory, Patton Museum of Leadership at Fort Knox, and much more. The factories showed how important industry is and how agricultural education can help with jobs in these industries. The Patton Museum gave students a new outlook on different leadership skills that can be used effectively anywhere in life.

Members were able to learn a lot from the Convention itself as well. They were able to listen to motivational speakers doing convention sessions that had powerful messages behind them. There were also workshops where members learned about speaking up and helping others out in their community or wherever they may find the need. Members were also able to meet others from all around the United States, and experience other once-in-a-lifetime opportunities.

The competitions comprised of Environmental and Natural Resources (ENR), Agricultural Communications, and Extemporaneous Speaking. Bryson Price participated in Extemporaneous speaking and placed in the top sixteen competitors of the nation, getting him a silver award. Agricultural Communications placed ninth in the nation and earned a gold award. The Environmental and Natural Resources team placed tenth in the nation, also getting a gold award.

Sutherlin FFA member and senior, Geruen Erandio, from the ENR team puts it simply, “Going to national convention was a great opportunity. Competing, meeting new people, and touring new places was amazing. Overall, the convention will be a memory never forgotten.”

On October 11, Sutherlin FFA members ventured out into local neighborhoods with over 500 brown paper bags for one purpose only: to end hunger. Oregon FFA has partnered with Les Schwab Tire Centers to “drive away hunger” in the month of October. Sutherlin FFA has done their part by setting paper bags on peoples’ doorsteps to be filled with canned and bagged goods as well as collecting money for the project at the high school homecoming’s powder puff game.

Overall, the whole project was very successful with a total of 4,362 pounds of food collected. The food gathered will go to the local Sutherlin and Oakland Food Bank. Sophomore Mackenzie Price said of the project, “It was really fun going out with everybody collecting them [the bags] and we got a lot of food for a good cause.” 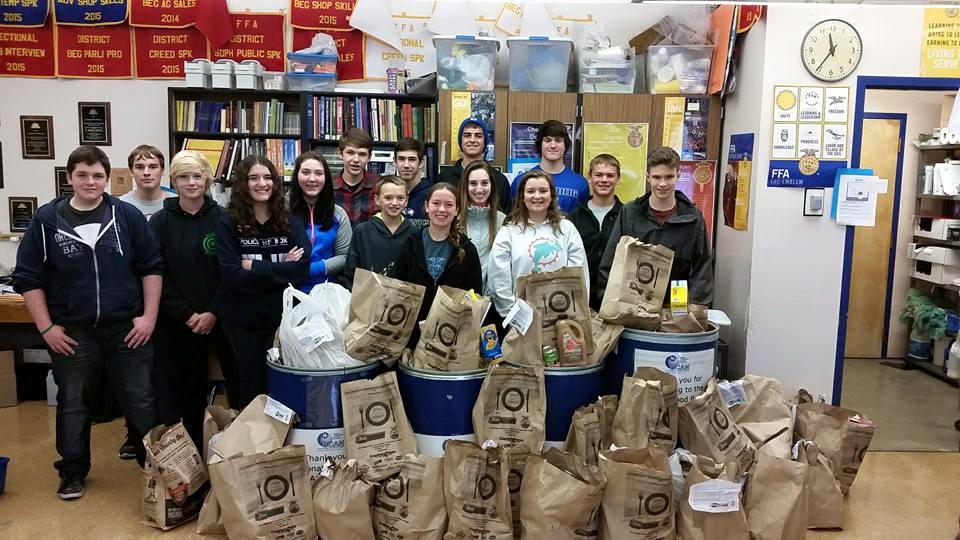 Members stand in front of the food they collected for the Drive.

On October 6th, the Umpqua District Soils CDE (Career Development Event) was held in Myrtle Creek, Oregon. Members judged soil textures, slope, water holding capacity and much more at the competition. There was a total of three competition pits and over 120 FFA members at the event. Overall, Sutherlin did very well, placing 1st for both advanced and beginning teams.

Later in October on the 12th-13th, State Soils was held in Rogue Valley, Oregon. About 140 FFA members competed total. The Sutherlin team placed second in State. Sutherlin did very well with all students placing in the top 40% of the competition. Sophomore and Sutherlin FFA member Jakob Saucier remembers of State Soils, “Although the competition was difficult, we persevered and ended up learning a lot.”

Sutherlin FFA students gather their soil from a pit to be judged.

The Second Annual CTE Dinner Was a Success!

On September 24th, Sutherlin FFA held their Second Annual CTE Partners Dinner. Many of the program’s partners attended. There were many members there representing FFA, as well as students involved in the CTE program. It was overall an exciting and successful night.

At the dinner, the Champions of CTE were awarded, including; Roseburg Forest Products, Wildlife Safari, and Great Northern Trailer Works. The community’s leaders and CTE program partners were thanked for their huge support. Students, FFA members and guests were introduced at the dinner. The success and future of the CTE program were talked about by Mr. Crawford, Mr. Owings, and Mr. Gary. Senior FFA member, Leilani Vidarri, said of the evening, “This year’s CTE dinner was a great opportunity, both to meet and interact with our community’s business people and FFA supporters and to represent our school, and show off the great things that we’re doing here." 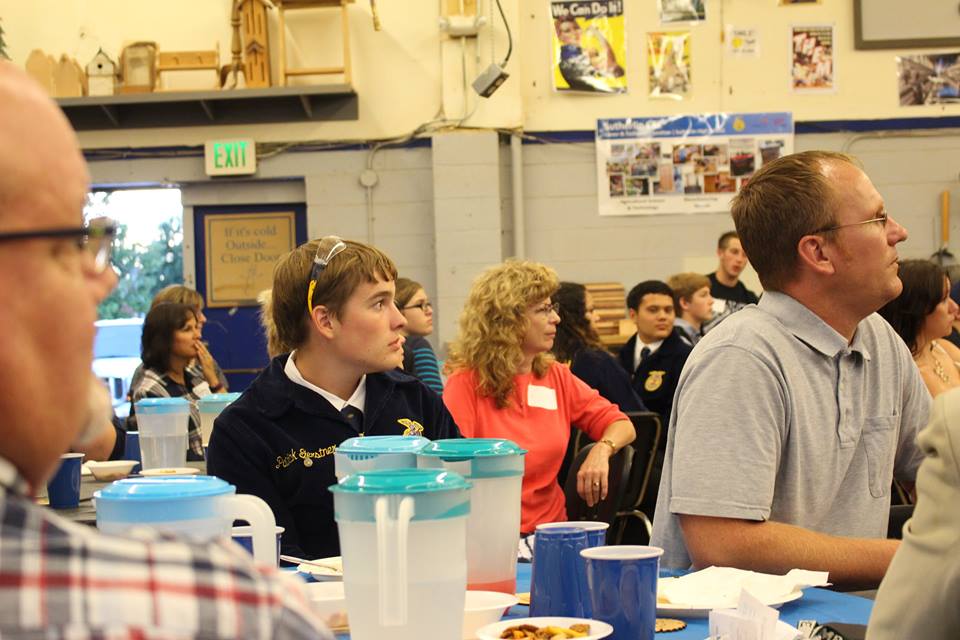 FFA member, Patrick Gerstner, sits with a table of guests while watching a speaker at the podium.

National FFA Week is coming up February 21-28! The purpose of FFA Week is to spread more awareness of the National FFA Organization. It is celebrated on not only the national level, but local levels as well.

FFA, officially known as the National FFA Organization, is a student-led organization.  It is an integral part of Agriculture Education, combining agriculture with high school curriculum, as well as teaching students the skills they will need for the rest of their lives. The organization strives to help students develop their potential for premier leadership, personal growth, and career success.

FFA Week gives chapters the chance to share what FFA is within their schools and communities. Chapters do this by participating in local community service events, and hosting activities and games during school assemblies.  Some members also raise awareness through social media posts.

The chapters of the Umpqua FFA District include Oakland, Sutherlin, Elkton, South Umpqua, Roseburg, Glide, and Days Creek. Activities will be happening at many schools this week.

Sutherlin FFA beefs up in Denver!

On January 8-12 the National Western Meats Competition was held in Denver, Colorado and Sutherlin performed very well placing 6th as a team. The team included Sutherlin FFA members Shaleen Allen, Joe Matteo, Bryson Price and Taylor Brooke. In order to go to the competition the team had to place 2nd in state.

The Meats Science and Evaluation Competition consisted of students evaluating beef, pork, and lamb carcasses based on thetexture and tastiness of the meat. Members also assessed the amount of fat the carcasses had.

The members also had the ability to go to many interesting places and events. This included Colorado State University, the University of Wyoming, an exciting rodeo, the National Mint, and the National Western Stock Show.

Shaleen Allen said of the opportunity, “Going to the competition allowed me to get more involved in FFA in ways I did not expect. Overall, it was a great trip and a quality learning experience.”