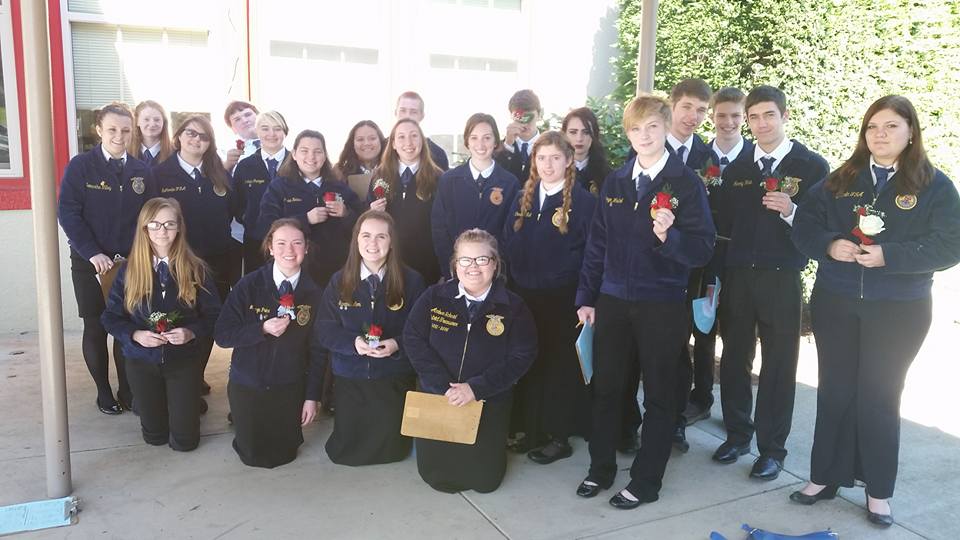 The 2015 - 2016 FFA State Convention was held March 18 - 21 at Oregon State University. This year, fourteen students - six competing, four on committees, and four for other purposes - from our chapter and more than 2,000 from the entire state attended the event. Many topics, from not taking the little things for granted to letting our own light shine, were covered as the current State Officer team presented their retiring addresses. Members were also given the pleasure of hearing a presentation from National Vice President  Abrah Meyer.

State degrees and Proficiencies were also presented at Convention. A total of eight people from Sutherlin earned their State degrees this year, and one person was awarded a Proficiency award. Bryson Price, one of this year’s graduating seniors, won the Home and Community Build Proficiency and was also awarded the STAR Award, the highest Proficiency that an individual can achieve at the state level.

The 2016 - 2017 State and District Officer teams were comprised as well. Both Mackenzie Price and Lee Wesenberg became District Officers, with Mackenzie as District Secretary and Lee taking District Reporter. Sutherlin is also proud to announce that our very own Bryson Price was given the seat of State Sentinel.

Another highlight of State Convention this year was the State level Prepared and Extemporaneous Public Speaking CDEs. Bryson Price took part in Prepared Public Speaking and took home a white banner after placing third. Colby Hobgood and Lukas Roman both participated in Extemporaneous Public Speaking. Lukas grabbed a red banner, placing second overall. In a usual scenario, Lukas would stop there, with only the first place winner going on to Nationals, but the first place winner has opted out of going, so Lukas will continue his Extemp skills at the National FFA Convention in his place.

They weren’t the only people competing at State this year. Sutherlin FFA also had a marketing team give a presentation. Cassidy Leatherwood, Tristan Vincent, and Mackenzie Price took part in that CDE, and took home some skills to help later in life.

All-in-all, the 2015 - 2016 Oregon State Convention was a blast, with everyone taking home something to illuminate them. Awesome job to all participants and congratulations to all who placed! 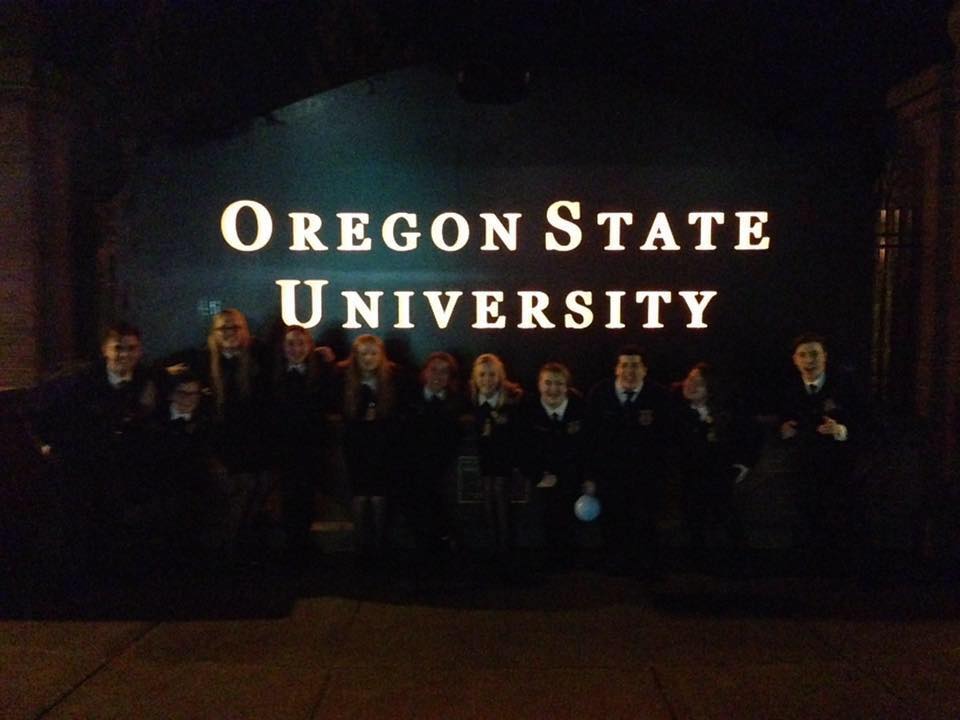 Proficiencies and Job Interview for the Win!

On February 3, a group of students went to Days Creek High School to compete in the Job Interview and Proficiencies Career Development Events. Job Interview preps students for the future by giving them a taste of what to expect during a real life interview, while Proficiencies are awards for a student’s Supervised Agricultural Experience based on what that SAE is.

In Proficiencies, Bryson Price is moving on to State for Home/Community Development and Agricultural Sales. Great job to all who participated!

In 2015, Les Schwab Tires and Oregon FFA banded together in "Tired of Hunger," a food drive initiative. Oregon FFA wanted to give them some sort of token for their appreciation. They decided to have plaques built, so they enlisted the help of Sutherlin FFA. The eight students who competed at Nationals took it upon themselves to complete this task. This video shows the process of making the plaques. They were shipped to every Les Schwab Tires Center in Oregon.

Our annual plant sale continues this weekend - May 1st and May 2nd! Hours will be Friday 2pm-6pm and Saturday 8am-4pm.  We will be offering flowers, vegetables, hundreds of hanging baskets as well as wood and metal art.

DID YOU SEE THE VIDEO TRAILER FROM OUR MARKETING TEAM?

HOW ABOUT TRAILER 2 FROM THE AG COMM TEAM?

SEE WHAT'S AVAILABLE!  CHECK THEM OUT BELOW, AND VISIT THE SHS CTE PINTEREST PAGE! 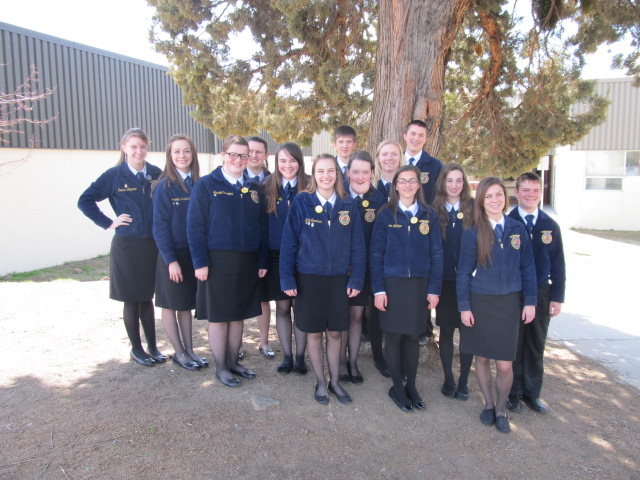 Goodies from a Grant

The Sutherlin FFA Chapter has dozens of active members who not only compete in competitions, but also raise market animals to sell at the Douglas County Fair. This is a big task for all of the excited students, and some of them require a bit of help. Sutherlin FFA Chapter is fortunate enough to have an FFA Land Lab; the Land Lab was established in 1981 in order to provide housing for FFA member’s animals, or Supervised Agricultural Experience. Our chapters land lab is located at Plat-I Reservoir in Sutherlin, it sits on eleven acres, has a swine and beef barn, and two fenced fields.

Sutherlin FFA members are more than welcome to utilize this land for raising their animals free of charge, but they are expected to earn their keep. Land Lab users are asked to participate in clean up/work days a few times each year that they use the Land Lab. Recently Land Lab users and other students volunteered their time to tear down a fence on one of the fields so that it could be replaced using grant money that the chapter has received for improvements.

This grant money the Sutherlin FFA Chapter received for the Land Lab adds up to around $60,000! With this money there are many improvements planned for smoother and more advanced running of the Land Lab. Some of these plans include replacing all of the fencing, putting gravel in for better roads, adding a squeeze chute for the cattle, replanting the fields, and adding irrigation for the fields. The projects planned are expected to be completed in Fall of 2014.

Sutherlin FFA members traveled all the way to the Sutherlin Family Church on Monday, February 24th for the Sectional Leadership Career Development Events. Sutherlin had a great turn out at the district event a week prior with many individuals and teams moving on to this state level event. "It was a success," says Joe Matteo Sutherlin FFA Chapter Officer, "and a great end to weeks of hard work." Sutherlin FFA members worked hard preparing for all of the different speaking events. Sutherlin results include: Creed Speaking-Emma Matteo (1st), Sophomore Public Speaking- Bryson Price (2nd), Advanced Public Speaking- Kylee Carson (3rd), and Advanced Parliamentary Procedure (2nd) consisting of Jessica Freeman, Kylee Carson, Heather Brown, Bryson Price, Joe Matteo, and Kelsey Maillet.
These events are all very good learning experiences regardless of the placing, but it is very exciting when FFA members bring home blue, red, or white banners just as Sutherlin will continue to do. 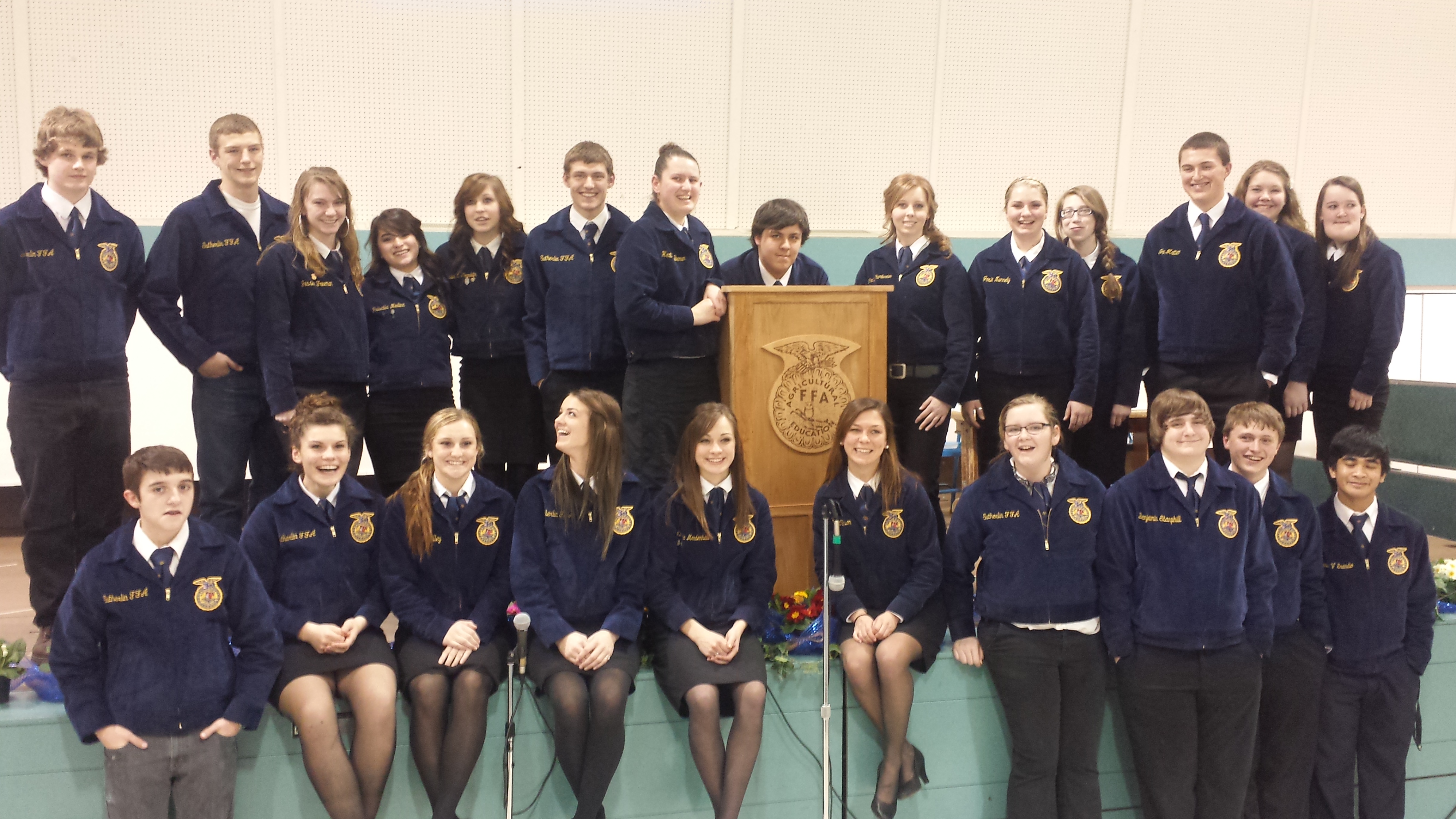 Wednesday, February 19th the Sutherlin FFA Alumni held their annual auction at East Primary Elementary School. The night was fun filled with a delicous dinner and many excited FFA members!"I always love helping out at the Alumni Auction" says Tessa Franklin, a senior, " It's awesome to see all the support we have in our community, and to see all the eager FFA members helping out."  Many FFA members brought homemade desserts that buyers went crazy for. Miranda Mendenhall's carrot cake even went for over $300! With generous donations from the community and many giving buyers the Alumni was able to raise $18,160!! This is the most money that has ever been raised at an Alumni Auction! This money goes to the Alumni so they can support the FFA chapter by providing for trips, buying supplies, providing scholarships, and much more! Sutherlin FFA gives a huge thank you to everyone in the community, and to our Alumni for being so supportive, and giving us the oppertunity to grow in the FFA.